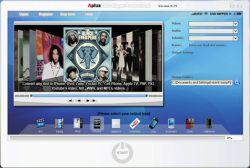 
ps: use any license name if requiered.

AplusDVDCopy 8.79 in this offer is the same version they offer back in July 2008 Giveaway. The current version is 8.87 (The version show when install the latest download).

AplusDVDCreator 8.68 in this offer is older version release back in 2007. The current version is 8.87 (The version show when install the latest download).

AplusDVDRipper 8.59 in this offer is also older version release back in 2007. The current version is 8.87 (The version show when install the latest download).

Not sure why they offer such an old version of their products.

I've use their video converter for a couple of years quite happily, so I thought I would try this package out.
I am extremely disappointed with the DVD Creator. True it is very simple to use and that’s the problem – it is SIMPLE. There is no way of creating a menu. If you “merge … multiple movies and episodic files”, that’s all it DOES. Merge into one large movie with no “chapters” to skip.

So if you want simple OK, if you want a reasonable tool – forget this product – Thumbsdown for usefulness on the Creator alone.

Aplus DVDCopy ----- Basically this just copies a DVD from 1 place to another, with the option to transcode the video so a dual layer DVD will fit on a cheaper, single layer blank. Can't say how well it works because on XP Pro SP3 32 it only crashed on me, probably due to some conflict or other with the loads of video-related software I already have installed. No Matter, because DVDCopy is hardly what I'd call essential...

Aplus DVD Creator ---- This program lets you put your audio/video files on a Video DVD. It uses the NCT code libraries (that it puts in Windows' System32 folder) that many running Vista have reported problems with. It also uses some code from the free Linux app, DVD Author, which requires some cygwin files to run in Windows... older versions are included (probably for compatibility with older versions of Windows) & these can also cause problems. Aplus DVD Creator does not let you do DVD menus or chapters etc.

Aplus DVD Ripper ---- This is best used for making smaller framed copies of DVD video... It uses ffmpeg, which is cool (if a bit slow), & includes an older version of the Xvid encoder. Rather than strip any DRM from a DVD, so you have the original audio/video files, Aplus DVD Ripper appears to take snapshots, recording the DVD's running video. Unfortunately there aren't enough output format choices to compete with other apps for conversion to/for portable players, including many previously on GTOD,

Alternatives:
DVDFab has a free version that will copy a disc to your hard drive. Once there, ImgBurn will put it on a disc. If you want to go from dual layer to single, DVD Shrink or its sibling, Nero Recode, will copy just the video & audio you want, which usually is all it takes -- they also give the option to reduce the size, but the loss of quality is noticeable if you decrease the size by more than 10%. If at 90% the audio/video still won't fit, best option is to consider burning a dual layer blank.

There are loads of alternative DVD creating programs, many free or low cost. DVDs use mpg2 video & usually AC3 audio, so trans-coding what you've got can be a major part of the job. If the time it takes to encode your video is a big concern, you might want to look at utilities that use your graphics card's GPU -- it might only take minutes instead of an hour, or several (depending on system speed), but you'll need to handle the audio separately. Software that focuses more on DVD features, like nicer menus, most often assumes you've already got your content ready. Many, like the entry level versions of Sony DVD Architect, will encode your content for you, but won't import a lot of formats. Others will take just about anything under the sun, but you're limited when it comes to menus &/or DVD features.

The free version of Muxman is ideal if your audio & video are already prepared, & you don't want/need menus. I like to play with menus & features, & I personally like the Sony apps -- you can pick up the casual user versions for cheap if you find them on sale (usually with MIR). The free DVD Author is very capable, but there can be a steep learning curve. The Windows GUIs for DVD Author vary quite a bit, but one of the simpler (more limited) versions is called DVD Styler -- a new portable version was just released at Portableapps.com, which has little if any impact on your PC if you want to give it a try. There are a few versions available of DVDLab (pay-ware), if you like a lot of control & don't mind getting your hands dirty, but your content better be ready beforehand. In between the extremes there are several (many shareware) apps you can also check out at videohelp.com -- many are popular, make a great compromise with a lot of flexibility, accepting a lot of formats, but the DVDs they produce sometimes (but not often) have problems. Same with the entry level DVD software from Sonic -- easy to use with a reasonable amount of features, but I wouldn't use it for home DVDs I intended to pass out to relatives -- I don't want even the slightest chance someone's player might have problems, since I don't like playing tech support.

Quadratic Formula PQ PRO
This app uses the pq formula for finding the zeros of a function quickly and easily.
$1.99 ➞ kostenlos

Solving Pythagoras PRO
The calculation of a right-angled triangle is no longer a problem.
$1.99 ➞ kostenlos

Rule of Proportion PRO
Proportions are no problem anymore. For this, only 3 of 4 variables must be entered.
$1.99 ➞ kostenlos